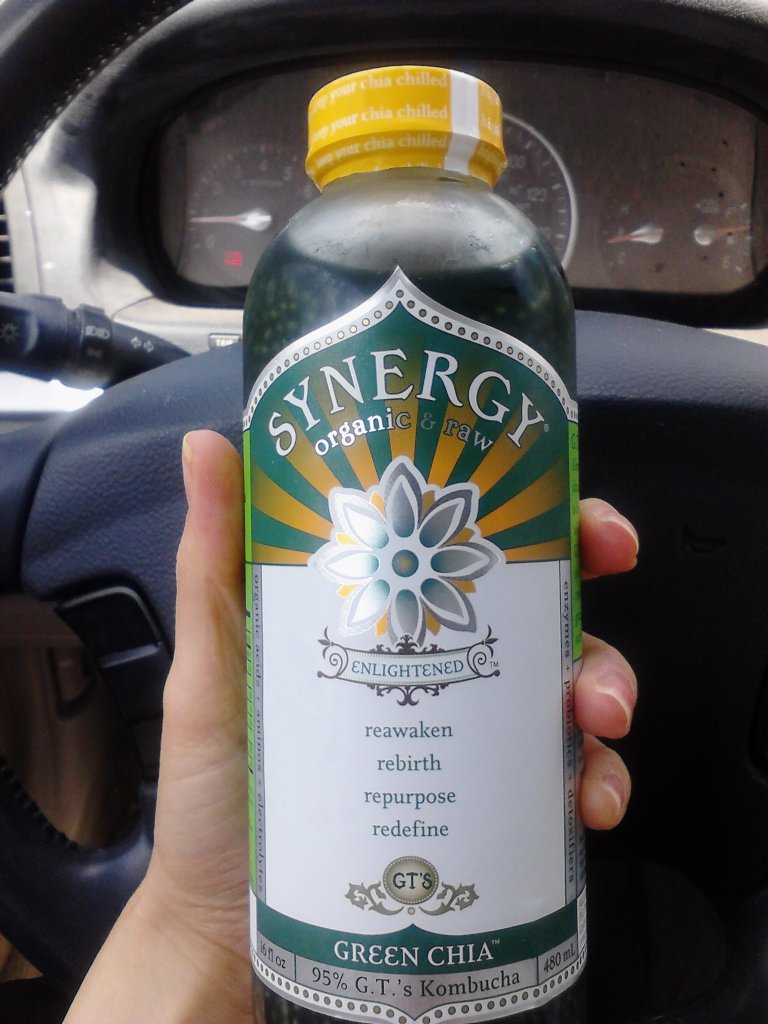 The first time I saw a bottle of kombucha was early on in my Journey Back to Wellness…when I first began to shop at health food stores like Whole Foods Market and I really didn’t know what half the stuff in the store was. Sometimes I stayed away from the unfamiliar stuff, other times I got brave and just tried it. I happened to be looking for a beverage in the prepared food section since I was buying lunch, and I saw this mysterious, exotic looking glass bottle with pink juice inside. It was the Guava Goddess flavor of GT’s Enlightened Synergy Kombucha. I knew I liked guava and saw that it contained probiotics (which I had just started taking in capsule form at the time) so I figured, hey–those are good things, right? So I decided to give it a whirl though it was about $3.00 for the bottle.

I was going to just have it when I got home, but the cashier asked me if I wanted to leave it out of the bag to have it on my ride home so that’s what I did. I opened this magical-looking bottle and took a whiff–my expression immediately puckered at the sourness of the aroma. It smelled like guava juice mixed with vinegar. I looked into the bottle and noticed some particles floating on the surface too–and I immediately marched back into the store, right to the customer service desk, and announced that they had sold me rotten juice. The guy behind the desk and laughed, saying no–this wasn’t “juice”, this was kombucha and it was fermented which is why it had the vinegar-y smell and that the stuff floating on top was just some of the probiotics. I wasn’t convinced and was still a bit grossed out, so I returned it without even tasting it and went on my way.

Kombucha and other fermented foods may be an acquired taste for some.

I didn’t actually try kombucha again until years later, though I had thought about it since I had already experimented with making my own kefir (successfully!), my own cultured vegetables, and had switched from my capsule probiotic to Body Ecology’s liquid probiotic beverages (which taste quite funky).

I was at an Integrative Nutrition? conference in NY with a bunch of my colleagues and it was lunchtime. We went to the gigantic Whole Foods in Columbus Circle for lunch and nearly everyone in the group grabbed a kombucha to drink with lunch, raving about how delicious it was. I decided it was time to try it for real this time, so I picked a berry-flavored one (not sure the exact one), gave it a gentle shake like I saw my friends do, opened it slowly (it’s a bit fizzy), and took a swig. It immediately reminded me of a wine cooler or other fruit-flavored alcoholic beverage–it was really good! There were probiotic particles on the bottom of the bottle (which are perfectly normal for any fermented beverage), but I was used to that from my Body Ecology probiotics. It seems my palate had become accustomed to the tangy, sour flavor of fermented foods because had the bottle not been so expensive, I probably would have had more than one.

Kombucha can be an expensive habit.

I started buying a bottle every time I went food shopping. I tried just about every variety, and really came to love the ones that had chia seeds added–it’s like drinking jello! Then I began buying them by the case so I could save 10% on the cost. Even so, this added quite a large chunk of change to my monthly grocery budget. I felt it was worth it though, because my digestion and my skin began to improve even more than it already had from cleaning up my diet.

I really wanted to make my own to save money, but didn’t know how to go about it since I didn’t know where to get a SCOBY (Symbiotic Colony of Bacteria and Yeast) and starter culture. It was easier to make the kefir, because I had an online source for the starter–Body Ecology–that I trusted. I found lots of online SCOBY distributors but didn’t really know how to know I was choosing the right one. I had read about culturing my own from an existing bottle of kombucha but I had read some comments questioning the safety and efficacy of this method, so I didn’t even try it. Instead, I decided to ask my holistic health colleagues if anyone knew of a reputable online source. I was really happy that my friend Cara, who lives near me, responded that she had been making her own for quite some time and had an extra baby SCOBY I could have. Score!

I picked up my SCOBY, which resembled anything from a mushroom to a jellyfish to an alien–you decide. My kids call it a “probiotic slime monster”.

I ordered a gallon-sized glass mason jar and some other glass jars for later, downloaded the guide Cara suggested, and got to work. Kombucha is made using tea–organic black tea is the best to start with because of the caffeine content (organic is preferred because pesticides in conventional teas can harm the SCOBY); and also organic cane sugar. Normally, I don’t use refined sugar for anything I eat or drink, but it is necessary for the fermentation process to happen–the friendly bacteria and yeasts digest the sugar and caffeine almost completely during the process. So yesterday I made my tea and dissolved about a cup of sugar in the tea. I let it cool to room temperature (which took hours), poured it into the gallon-sized glass jar, added the starter tea with the SCOBY Cara had given me, and put it on a dark corner of my kitchen counter where I know the temperature is steady.

Today is officially Day 1 of my kombucha experiment and not much is happening yet. 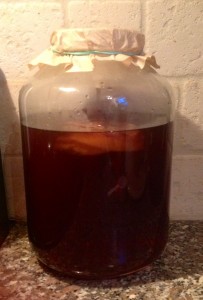 The entire process takes two to three weeks, and from what I read, I should expect to see some bubbling, smell a vinegar-y smell, and the SCOBY should grow. I have to be honest–patience is not my best virtue–I so want to taste it, like, NOW! I figured writing about the process and sharing it here would be a good way to distract me from the process of waiting.

Have you ever made kombucha?

If so, I’d love to hear from you. Please share your experience and any tips you might have in the comments! 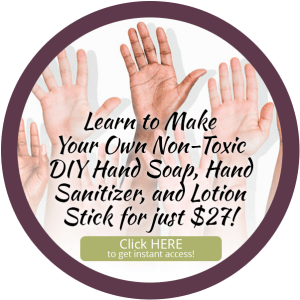