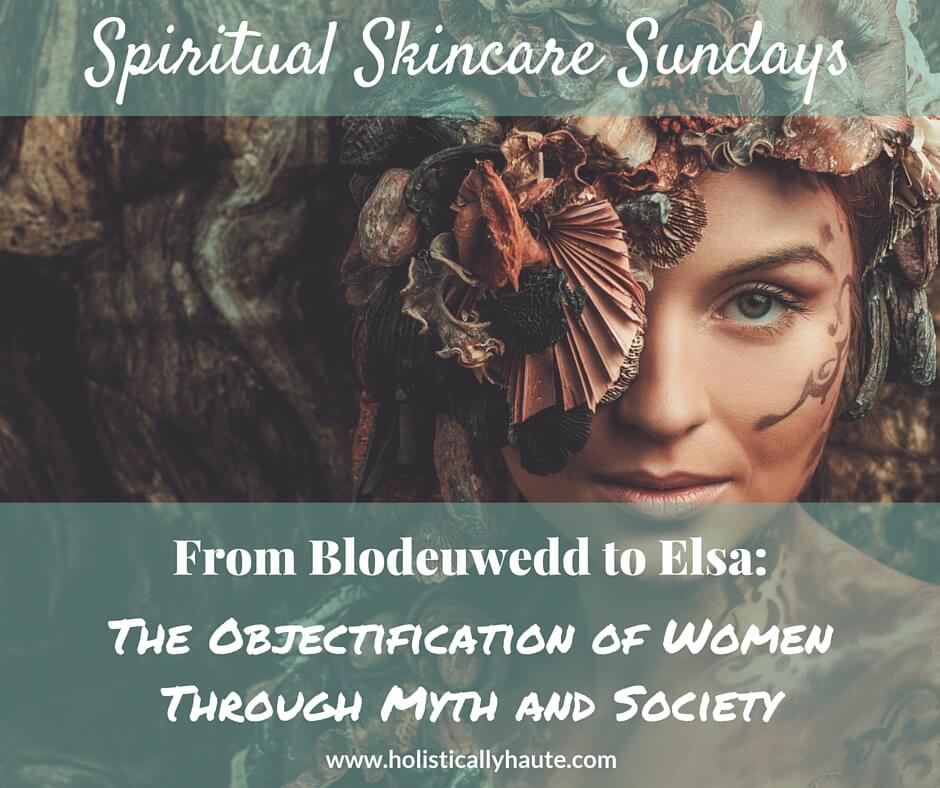 
Today’s musing came to me as I was doing work editing an anthology about the Welsh goddess, Blodeuwedd, for one of my spiritual communities. Blodeuwedd is also known as Flower Face, and was created by the magician Gwydion and his Uncle Math (who was the king, Math ap Mathonwy) out of sacred flowers and herbs, to be the wife of their nephew Lleu Llaw Gyffes (son of the goddess Arianrhod).

Blodeuwedd is happy enough with Lleu who treats her well but only considers her a beautiful thing, until she meets the dark and dashing Gronw during one of Lleu’s many absences, and they fall in love. He loves her for who she is as a person. They find Lleu’s weakness and trick him into vulnerability, at which point they kill him. Lleu is transformed into an eagle that soars off into the light, but Blodeuwedd is transformed by Arianrhod into an owl–condemned to darkness and night–as her punishment.
In the Mabinogion–the main text of Welsh mythology–Blodeuwedd is portrayed as a scheming, adulterous, ungrateful?woman who kills her husband. Part of the work that this spiritual community of mine does is to identify times through history and legend where stories written by men portray women negatively, and retell their stories from the?woman’s?perspective. In this upcoming anthology, the stories do just that, and the perspective is quite compelling.


My work on this anthology led me to examine other examples in legend, literature, and the media where women were created for men–either for their pleasure or to do their will–and then are portrayed as ungrateful, evil, or selfish when they opt to make their own decisions and live their own lives.
Some examples that came to mind are Eve–created as a companion to Adam destined to live in ignorant bliss, until she decides she wants to know more, and then is exiled and punished for eternity.
Then we have the story of Pygmalion and Galatea, later adapted as Shaw’s Pygmalion and the film My Fair Lady, where a woman is “molded” to be what the man wants her to be, for his status and amusement–but when she wants to be true to herself and finds a suitor who loves her for who she is, she is shunned and seen as selfish and ungrateful.
Then of course we have the 80s classic, Weird Science, in which two teenage boys create a woman to their physical specifications and program her to not only please them but also to raise their social status publicly. In the end she’s shunned the least of the examples thus far, she leaves and the social statuses?and confidence of the two teenage boys are forever changed (this leads to another common theme throughout legend of the older woman teaching the young boy, ultimately leading to his sovereignty).
Another?example is in Phantom of the Opera, where ingenue Christine Daae is forced to be the face and voice of the Phantom’s genius. He in love with her voice and what she can do for him, but not for her as a woman, and when she falls in love with Raoul who loves her for herself, despite the Phantoms efforts to kidnap, guilt, and intimate her into marriage, all hell breaks loose, the opera is destroyed, and it’s all Christine’s fault.
It makes me wonder–this pattern of women being shaped and molded into whatever a man considers to be ideal, and being equated to nothing in her own right without the man’s will or permission–how has this affected the lives of women today? The way women see themselves and think of themselves? The decisions they make, how they relate to others, how they teach their daughters to see themselves? Why do we allow this?

We can blame society all we want, but in truth, we must be in charge of our own destinies.

We must step into our own sovereignty and claim ourselves and our purposes in life FOR ourselves. We need to stop doing things to ourselves to be pleasing for others, and to first please ourselves. Women today have gotten used to being objectified, and to being placed in roles of subservience. Women have gotten used to having a pretty outward appearance, even if they feel empty and unfulfilled inside. Women with any ounce of power, confidence, or authority are considered dangerous, bossy, or evil, and are guilted into downplaying their dominant personalities due to the fear of others. We can even see remnants of this in Disney’s Frozen: “Conceal, don’t feel,” though that has a happier, more empowering ending.
I encourage you, next time you find yourself feeling objectified or stifled; or pressured to look, be, or act a certain way, ask yourself who is this for? The truth is that our souls are free. They are equal, and they exist to please no one or serve anyone but the greatest good. Any message otherwise is the result of societal conditioning and a dominant ego. It isn’t what’s real or true, and it is but a temporary chain that only binds as long as we let it.

I am One with the Divine–the great Mother who began all life, and I am an individualized version of Her, here to bring life, wisdom, and transformation to anything needing it for the greatest good. I am that spark, that breath, that catalyst, and all that I create is for the greatest good of all, including myself. For this, I am grateful, I let it be so, and so it is.

Can you think of any other examples in myth, society, or even in your own life where this pattern exists? Share your thoughts either here in the comments below, or come over to the private Spiritual Skincare Sundays group on Facebook and join the conversation there.
*Photo of Dian Smith’s?of Blodeuwedd, photo of Audrey Hepburn, Creative Commons, photo of Elsa by Ari Ashari.
**Affiliate Disclaimer

There's Still Time to Join Us