Recently I wrote a nice little post about some alternatives to waxing if you have sensitive skin, want to avoid petrochemical ingredients; or like me, have developed an intolerance to some commonly used ingredients in professional waxes. Much of that post was about what a great natural and inexpensive alternative sugaring is to waxing. I even included a video courtesy of Ms. Toi that gave a very thorough, step-by-step, and seemingly easy recipe for making your own sugaring solution rather than buying it pre-made; because if you have to go out and buy it you are really not saving any money which defeats part of the purpose of choosing sugaring in the first place.


Since I wrote about and recommended making your sugaring for your various hair removal needs, surely that means I’ve made it several times successfully myself right? That would be a no. I have to admit that I have used pre-made sugaring strips and microwaveable sugaring solutions with excellent hair removal results but until very recently I had yet to make it myself.

How hard could it be?

Sugaring has been made and practiced by several different cultures since ancient times. Plus, Ms. Toi made it look so simple?I mean you just take some sugar, lemon juice, and water and heat it up until it turns brown and then take it off the heat and let it cool before use and then you’re good to go, right? Plus, I do not live in ancient times?I am not making my sugaring over an open fire?I have a nice modern stove which I have become quite competent at cooking on (if I do say so myself). So I should be able to make this stuff successfully on the first try, easy peasy, no problemo?right?

I gathered my ingredients in my stainless steel pot and started heating it up. The mixture was opaque so I knew the sugar still had to dissolve.? 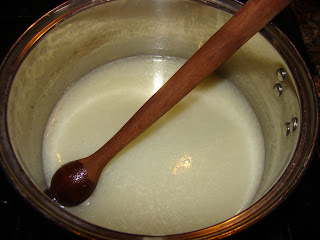 It started bubbling furiously so I lowered the heat to see that the mixture was now clear, so that must mean that the sugar had indeed dissolved. Score.? 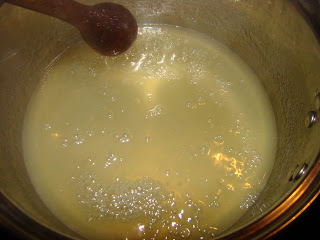 So according to the directions in the video I was supposed to keep stirring over a low heat until the mixture turned a lovely shade of amber and was the consistency of honey, which was supposed to take no more than eight minutes. Well about 20 minutes later, the color still looked a little light to me, and it still seemed very liquidy despite the fact that the mixture was reducing.? 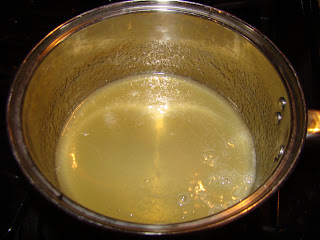 So I kept going until I got the color that I thought it should be and got a little thicker.?

Then I took it off the heat and figured I’d pour it in a glass storage container and let it cool a little before handling it since hot sugaring is?well, hot. After a few minutes I tried to stir it and it seemed rather?firm. So firm in fact that as I lifted the spoon out of the bowl I actually ended up lifting the bowl. Hmmm.?

Nonetheless, it seemed to be at a manageable temperature, and Ms. Toi did show a demonstration of using a harder sugaring mass and rolling it on by hand instead of with a spatula, so I figured it would probably work.

I went to stick my hand in and felt that the mixture was still too hot to actually touch with my bare hand, so I took my trusty spatula (that is, tongue depressor), stuck it in and pulled out some sugaring and shook it a bit to cool it. There, that should do it. I touched it and it seemed fine.

What’s that most important fundamental rule I learned in school about waxing?

Oh yes, always test the temperature before applying it to a client. But since I was using it on myself not an actual client I bypassed that step. Instead, I took my air-cooled dollop of sugaring and smeared it on my calf?and started seeing stars because it was so hot even though it didn’t seem it. I figured I needed to get this stuff off immediately so I took my strip and pressed it over the burning sugaring?which was even more excruciating of course. Why I didn’t just stick my leg under a cool faucet I don’t know?I pulled off the strip and thankfully my skin was still attached to my leg, although it was horribly red and swollen. The hair was gone from that area?but not because the sticky sugaring had pulled it out by the root?no. It burnt it right off. D?oh!


I am currently working on an upcoming article for a magazine about natural hair removal techniques so I figured I’d better keep practicing; so right now, attempt #2 (slightly different recipe which includes honey and slightly different technique) AND attempt #3 (original recipe) are simultaneously cooling in the refrigerator. Fingers crossed that at least one of them works!


So let that be a lesson to anyone who wants to make their own sugaring?don’t listen to anyone who says it is easy if you haven’t made it before. Ms. Toi said it takes practice and she wasn?t kidding. And if you do make some, even if you think it is cool enough, let it cool more. I learned that sugaring does NOT cool evenly (it can still be very hot in the center of the dollop even if it doesn’t feel it to the touch), so even if you think it is ready, let it cool even longer. I was lucky that my burn was not that serious, but VERY serious burns can occur if you aren’t careful. After a rather stupid mistake, I definitely learned my lesson!

How Do You Know If Your Skincare Is Safe for the Eye Area?

Scents and Fragrances in Skincare: Natural vs. Synthetic