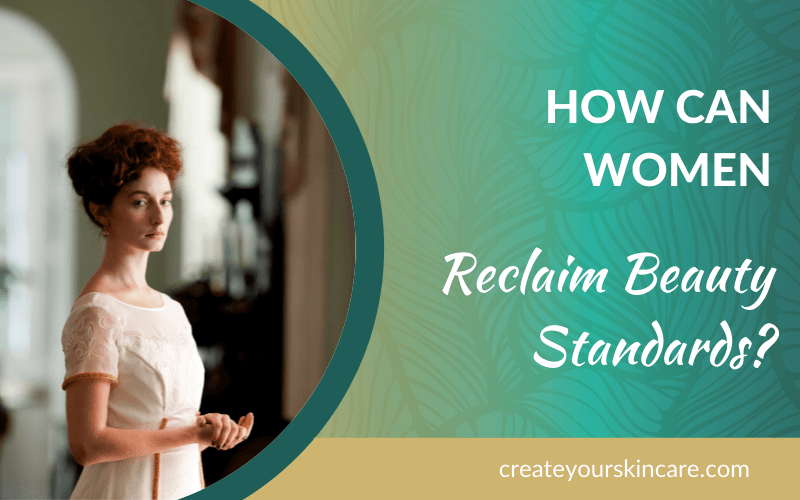 When you see period dramas, like Downton Abbey or Bridgerton, you see the Hollywood version of aristocrats being primped and fluffed by their ladies’ maids, in the comfort of their own luxurious, velvet and silk chambers. Whether the beauty standards of the time were the fresh-faced, no-makeup look of the Regency through Edwardian periods in England, or the more grandiose white-faced and red-rouged cheeks and lips of the 18th century French court, the “glam squads” of the time made sure their ladies exemplified those standards.

Non-aristocrats who couldn’t afford a glam squad scoured the ladies’ magazines and consulted with apothecaries of the time for magical elixirs and gadgets to help them achieve whatever beauty standards were en vogue at the time. Even before advertising agencies and mass media existed, there were plenty of royal and aristocratic “influencers” encouraging them to reach society’s highest standards of light-skinned, flawless, and wrinkle-free complexions.

Women willingly risked permanent disfigurement in order to achieve those beauty standards, regardless of age or social class.

From scorching hot irons, blindness from belladonna eye drops, or having their flesh (and health) literally deteriorate from peruse (white lead vinegar-based enamel powder foundation), because a woman’s role was mainly to be marriageable and/or on display, they risked it. In order to have any promise of a more comfortable life, women had no choice but to fit into the white European beauty standards set forth by the male-run church and society for centuries.

You might think that after a woman married, she could jump off the hamster wheel of unrealistic beauty standards. However, that was–and still is–not the case. Once a woman married, she then had to not only appear youthful and vibrant in public (because her appearance reflected upon her husband’s status), but also among her gossipy peers.

The pursuit of “virginal” skin

Though a woman’s other main role was to have children (mainly boys), once she did so (and especially if she couldn’t for whatever reason), society then deemed her old, and no longer desirable or valuable–even if she was still quite young in years. One ancient beauty recipe, which was a combination of rosewater, Balm of Gilead oil, storax, and benzoin was named “Virgin Milk” or “Virgin’s Milk” at some point between the Elizabethan and Regency periods in England (though this particular combination itself dates back 1500 years). This ingredient combination was considered quite the panacea, and was said to help improve everything from blemishes, freckles, fine lines, bruises, rashes, and dry skin.

It was called Virgin Milk in that era, however, because it was prescribed to new mothers soon after childbirth in order to help them restore their exhausted new mom face back to a virginal glow. While the initial ingredient combination has persisted since its earliest documentations, over the years the recipe did change. During the time where lead-based ingredients were popular, some Virgin Milk formulae did include “vinegar of lead.” It was used both as a facial cleanser and moisturizer, as well as a spot treatment.

Virgin Milk had some misogynistic years in its history, but that doesn’t change the fact that its core ingredients are incredibly nourishing to the skin and spirit.

For example, rosewater has been considered a women’s health ally for centuries due to its astringent, calming, antimicrobial, and cooling properties, as well as its pleasing aroma. It’s even been used in compresses to assist with postpartum healing.

Though Balm of Gilead oil’s origins and original constitution are shrouded in mystery, its various iterations all have documented medicinal benefits; some of which were skin specific. It also had many religious and ceremonial uses, with many mentions in the Bible and other ancient religious texts.

Benzoin (styrax benzoin or styrax tonkinensis) has been used since ancient times in medicinal practices in China, India, Malaysia, Indonesia and Japan to treat pain and various skin conditions. It was used for everything from minor abrasions to blemishes, mainly for its analgesic and antimicrobial properties. It was also used in perfumes, as well as anointing oils.

Storax resin is similar to benzoin, but comes from different trees. It’s known for its mild astringent and anti-inflammatory benefits, and because of its ability to make the skin feel smooth and supple. We know today that this is because it penetrates easily into the deeper layers of the epidermis, due to its lipid content and low molecular weight. Storax was also used in perfumery and religious ceremony.

I love the Virgin Milk ingredient combination so much, that I decided to create a Vintage Beauty Class about it.

However, since the name “Virgin Milk” is ageist and misogynist in nature, and represents beauty standards that I no longer personally subscribe to or promote, I decided to rename it “Milk of Sweet Poplar and Roses.”

Milk of Sweet Poplar and Roses the Vintage Beauty Club’s remake of the ancient “Virgin Milk” remedy. This emollient, refreshing beauty milk has a light-as-a-feather feel that moisturizes and revives the skin. It is the perfect all-in-one beauty product, suitable for all ages, skin types, and skin tones.

Its aroma is one that your spirit will remember—but from where is a mystery. I remember the first time I made it, I was struck by how powerful the scent was–and then I couldn’t get enough of it. It’s different from any scent you’ll find in skincare today, and it’s hard to pinpoint exactly what it smells like. But it was powerful enough to take me on a journey, and make me feel connected to the women who used it in the past.

In the Milk of Sweet Poplar and Roses class, you’ll not only get the new recipe and a video demonstration of how to make it. You’ll also get a history lesson where we go much deeper into the history of the Virgin Milk product itself, as well as its four star ingredients. I also provide you with some of the historic recipes, and a shopping list of the ingredients and supplies you’ll need to make this product.

Are you intrigued? Take the class HERE–it’s only $37!

Even today, many women endure risky and painful facial treatments in pursuit of unrealistic beauty standards.

Though more awareness about the origins of (and reasons behind) today’s beauty standards is spreading, many women (including trans women) still feel societal pressure to conform. Unrealistic beauty standards affect women of all ages, races, ethnicities, religions, and socio-economic backgrounds. Whether in the doctor’s office, aesthetics treatment room, or even with harsh store-bought products and gadgets or dangerous DIY at home, women put their skin at risk for whiter, smoother, plumper skin.

The beauty and fashion industries, Hollywood, and both mass and social media have done a very good job at convincing us that we NEED more and harsher products to look young and gorgeous. The lush film sets and costumes, glossy magazine ads, and nostalgic images have sold us the idea that beauty is a necessity–and that even if it hurts, the pleasure and social acceptance it brings is worth it.

WE need to set our own beauty standards–not men, religious leaders, politicians, or Big Cosmetics.

I’ve talked to so many women who feel pressured to get facial injections, harsh resurfacing treatments, cosmetic surgery, or use skincare products that burn–and it does NOT make them happy. It does NOT make them feel better about themselves. And they do NOT consider it self-care.

I’ve also receive emails from women from countries and cultures other than mine, who still do not have the privilege or freedom to make their own choices for how they should look or dress. I acknowledge that choice in beauty standards in many cases comes with white privilege.

I’ve also talked to many who feel empowered by the idea of being able to alter their appearance semi-permanently or permanently, or who feel very proud and comfortable within today’s beauty standards.

I’m not here to pass judgment–we are all on our own journey.

Attaining beautiful, healthy skin doesn’t have to be painful or expensive. It doesn’t have to be unrealistic, dogmatic, racist, classist, and misogynistic either! It can be whatever we want it to be. It should bring us JOY and make us feel good. I want women to understand that they don’t have to hurt themselves, or do something that feels wrong in their spirits or bodies in order to be beautiful or valuable at any age; and regardless of skin tone or texture.

I love learning about the roots of beauty standards, and what women have done throughout history not just to beautify themselves, but also to care for their skin. I love seeing how certain products have stood the test of time, though at certain points in history, they may not have been healthy or empowering. I love preserving what was good, positive, and healing from ancient remedies and vintage beauty products–while leaving what was toxic and disempowering in the past. That’s what I aim to do in the Vintage Beauty Club!

How do you feel about today’s beauty standards?

Do you enjoy using certain products or getting certain treatments that align with what’s popular today? Or do you feel pressured to conform into beauty standards that just don’t fit with your body or beliefs? 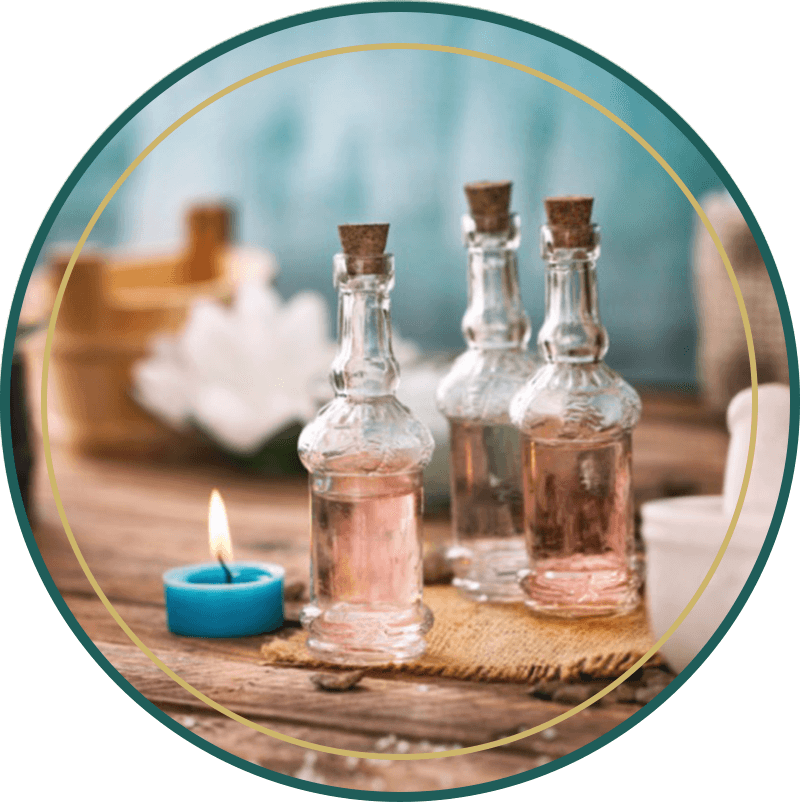