How I Kicked My Soda Addiction and Why You Should Too. 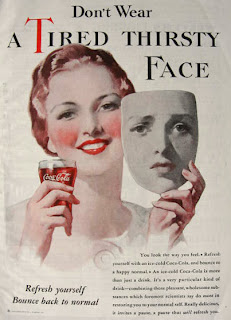 Even though our bodies require water to function properly, it is the unfortunate fact that soda is the most popular beverage consumed by Americans. Why is this? There are so many reasons but I think that the number one reason is that it is highly addictive. It is also usually cheaper than bottled water and other better bottled beverage choices, and is probably the most heavily marketed beverage out there, with many memorable and sometimes reminiscent TV commercials and print advertisements.

Soda is also everywhere in vending machines, even in places that claim to promote good health like my local YMCA (which I found both surprising and hypocritical). Soda may have been removed from many school vending machines, but its presence still lingers. I happened to be at a function held at a private school for children who have behavioral, developmental, and other learning disorders and there were Pepsi-sponsored signs everywhere in the gymnasium. The last thing these children (or any children) need is soda. It’s easy to see how soda addition is tough to break!

I admit that I was a soda drinker for many years. I didn’t grow up drinking it regularly, but once I left home and was a broke college student, it was the cheapest beverage I could find (other than my city tap water?which probably would have been a safer choice in hindsight). I knew it was bad for me, because my mom never had it in the house, but all my friends drank it and it was cheaper than bottled water or juice so I started drinking it. Then I started craving it, and I couldn’t live without it.

When I met my husband, he was also a soda drinker (primarily diet soda), so we both drank it. And we both gained weight. I was aware that soda makes you gain weight and sure enough, anytime I went ?off? of soda for a week I would lose 5 pounds or so. But it was such a habit I started back up again. I didn’t drink soda when I was pregnant or nursing either time, but picked it up again as soon as I stopped nursing my second child (which is also when I began to gain my weight).

It?s funny how many of us won’t drink soda or other ?bad? things when we are pregnant or nursing for fear of exposing our babies to these chemicals but we have no qualms about exposing our own bodies to them on a regular basis. I’m just saying.

Anyway, the more I learned about health and nutrition, the more I knew I could not reach my goals while being a soda drinker. Other than the fact that soda is high in caffeine, here are several reasons why drinking soda interferes with the achievement of good health: 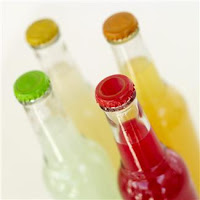 Regular soda contains a high amount of high fructose corn syrup (HFCS), which is one of the most dangerous forms of sugar. There have been so many studies about why is such an unsafe substance (although certain corn crop spokespeople claim it is no less safe than table sugar?which isn’t saying much by the way) that its producers are now marketing it as ?corn sugar? to make it sound less chemical. Tricky, tricky. Regular sugar is extremely addictive on its own, but genetically modified, manufactured versions of it, which HFCS is, are even worse. HFCS has been linked to mercury contamination, has been proven in lab studies to cause more weight gain (and all of the diseases caused by that) than sugar, and has also been shown to perpetuate the growth of cancer. There are even more issues with HFCS but I think you get the picture. It?s bad, it?s not natural, it?s not healthy, don’t consume it.

Diet soda is no better…it?s probably worse in fact.

This morning I happened to come across a study published earlier this year in the Journal of General Internal Medicine entitled ?Diet Soft Drink Consumption is Associated with an Increased Risk of Vascular Events in the Northern Manhattan Study?. I had already read some articles and found studies linking the artificial sweeteners in diet soda (aspartame, sucralose, saccharin) to toxicity, obesity, cancer (some of them have conclusive evidence, others are still up in the air), and several other diseases, but it?s always good to have a current, evidence-based scientific study to show that these issues are real. This particular study refers to vascular events like stroke and heart attack. Artificial sweeteners are also linked to weight gain because they trick the body into thinking it is ingesting sugar or sweetness, and when it realizes that it has been tricked it automatically goes into craving mode.

Many whole foods contain different types of acids such as citrus fruits (citric acid), and apple cider vinegar (acetic acid), but these acids actually alkalize in the body because the whole foods contain other necessary components to make them digestible and beneficial to the body. This is not the case with phosphoric acid. First of all, soda is as far from a whole food as you can get, and phosphoric acid does not alkalize in the body?it remains highly acidic and causes damage to various parts of the body. It has been shown to erode tooth enamel, weaken bones (and potentially lead to bone loss and osteoporosis), and also seriously irritate and inflame the digestive tract which can lead to acid reflux, gastritis, ulcers, and other digestive ailments. Phosphoric acid is added to soda and certain other processed foods for several reasons: “as a preservative, acidifying agent, flavor enhancer, and clarifying agent.” However it is also used commercially and industrially “in processes such as the coagulation of rubber latex, electropolishing, soil stabilization, and as a catalyst in the production of propylene and butene polymers, ethylbenzene, and cumene.”

Think about it?is that really something you want to be putting into your body?

How my husband and I quit our soda addiction: 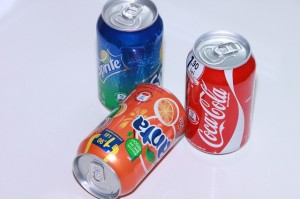 It?s quite simple, actually. I went back to drinking the ?soda? that my mom did keep in the house: seltzer water (carbonated water). It is water so it is hydrating rather than dehydrating and acidic, and it has the fizz factor that I loved about soda.

[Edited to add 3/21/12: I received an email from a reader who had concerns about the levels of carbonic acid in seltzer water. I was not initially aware of this, but after doing some research I learned that the addition of the CO2 gas for carbonation does produce a bit of carbonic acid that can lower the pH of the water making it more acidic. However, the level of acidity is determined by how much of the CO2 is added. Different brands of seltzer contain different amounts of CO2 and therefore have different pH levels. It is best to consume beverages with a pH as close to neutral 7 as possible, although most tap water and filtered water is slightly acidic. Only pure distilled water has a pH of 7. Anyway, this article has some more info about the pH of different brands of seltzer, and also recommends that you test the pH of homemade seltzer water if you make it yourself. All that being said, I still stand by my recommendation of seltzer as a transitional beverage in place of soda. It is a much better option overall.]

I like it plain, but my husband prefers it with a splash of fruit juice or lemon. Now seltzer water is not the perfect solution since the carbonation can also cause certain issues like gas and has also been linked to bone loss (although there is not yet conclusive evidence of loss); but I think it is an excellent transitional beverage to help get people off of soda.

Eventually flat filtered water, fresh fruit and vegetable juices, and high quality freshly-brewed unsweetened or naturally sweetened teas are the best options for beverages on a daily basis. I still enjoy the fizz from my seltzer water, and my husband and kids enjoy their ?fizzy juice? made from seltzer and fresh juice every now and then, and we do not miss soda (my kids have never even had it) at all. I did try some recently at a party because there was nothing else to drink for the grown-ups and it was so syrupy and sickeningly sweet I couldn’t even drink it. I’ll either bring my own drink or just go without next time.

Soda is one of the things I’ve come to feel quite strongly about during my whole process. It?s not healthy, there is no healthy version of it, and it should not be consumed by anyone at anytime for any reason ever. When people are transitioning to a healthier lifestyle I usually encourage them to take it step by step and finish products you have before replacing them with healthier options but that does not apply to soda. 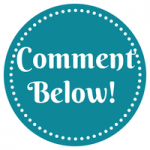 Or if you feel that strongly about not wasting something you’ve paid for, find an industrial use for it. I’m sure there is some rubber that needs to be coagulated somewhere.

Did you quit soda? What was your experience? Please share in the comments.

4 thoughts on “How I Kicked My Soda Addiction and Why You Should Too.” 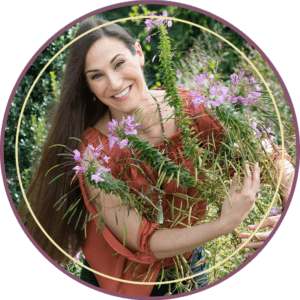