I have written a few posts so far about exfoliation: a basic overview, how water helps the skin naturally exfoliate itself, one about chemical exfoliation/peels, and most recently one about microdermabrasion. 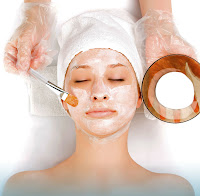 Most skin care professionals incorporate some kind of exfoliation into their basic facial treatments; whether it is a light enzyme peel/mask, or a pass with the brush machine.? And then you have the more aggressive exfoliation treatments like acid peels (AHAs like glycolic, BHAs like salicylic), microdermabrasion, and even laser resurfacing.? These procedures produce a superficial injury to the skin by removing layers of the epidermis (outermost layers of the skin), with the idea that new collagen will be produced and jump to the skin?s rescue to heal the new inflammation.

This results in a plumping and tightening effect on the skin, which softens the appearance of fine lines and wrinkles, helps improve the appearance of scars, and evens out pigment issues.? Sounds nice, right?? This is why these treatments are so popular.? These effects, however, are temporary.? Repeat treatments are needed, and a home care program that contains lower concentrations of the acids (mostly AHAs like glycolic acid, salicylic is used more for acne treatments) for everyday use.

For some time, I had no problem with this type of treatment protocol.? The theory of inflaming the skin to speed up the cell turnover rate made sense to me.? After all, this is what I learned in school, and these are the procedures that have the most popularity in salons and spas.

I attended a trade show last October, where I heard Dr. Ben Johnson speak.? That particular lecture was about treating rosacea, but he mentioned that he does not believe in regularly exfoliating the epidermis; or using acidic peels, microdermabrasion, lasers, or any other type of aggressive exfoliating method.? What?

I was very intrigued, since this was so contrary to what I had learned in school and had personally experienced in my own facial treatments.? So I went over to his booth and had the opportunity to talk to him and his very friendly staff.? Dr. Johnson was pressed for time, since he had another lecture to prepare for, but he was happy to answer a couple of questions for me.

We talked briefly about his skin care line, Osmosis Pur Medical Skin Care, and his theories about how excessive exfoliation actually ages the skin in the long term, and some new technology he is currently working on.

In a (large) nutshell?

Dr. Johnson believes that since aging of the skin occurs in the dermis, it is futile to treat aging in the epidermis.? Instead, he believes on preserving the epidermis, since it is the skin?s (and our bodies?) barrier against toxins, free radicals, and immune system aggressors.

Aging should be treated in the dermis from the inside out with good hydration and nutrition, and outside in with potent, yet safe, skin care products that are properly formulated to penetrate into the dermis, rather than getting trapped in the epidermis, which will eventually shed off and replace itself anyway.

Additionally, the dermis is already working so hard to repair the damage to it (and the epidermis) that is caused by constant exposure to free radicals, toxins, and stress.? Any new collagen that is produced by the body should go directly to where it is currently needed?not to repair new damage caused by chronic exfoliation.? When we inflame the skin by using AHAs or harsh abrasive measures, new collagen is indeed generated, but that new collagen goes to repair the immediate damage caused by the exfoliation, not to help repair existing damage; and this constant inflammation (while has visually appealing short term effects) will age the skin in the long run.

Dr. Johnson realizes that his view of exfoliation is not concurrent with what is going on in skin care at this moment, since methods of aggressive exfoliation provide such instant gratification.? He does not have a problem with people having a very superficial (low concentration) chemical (or enzyme) exfoliation done every now and then (no more than once a month); as long as the inflammation caused by it is not overwhelming to the dermis.? However, he does not recommend daily exfoliation via aggressive acids or scrubs.

I had to let it all sink in.

A few more months passed, and I performed many chemical exfoliation and microdermabrasion treatments on many different skin types.? I personally received these treatments, and used home care products that contain AHAs and BHAs as well.? I have to admit that every time I applied an acid to someone?s face, Dr. Johnson?s?words?were in the back of my mind.? I wondered to myself if I was actually helping the overall health of the skin, or if I was simply exacerbating the problem.

I decided to get more information from Dr. Johnson?so?I ordered his book and attended more of his trainings.

I also watched the videos and read the articles on his site, and participated in a virtual expo (courtesy of Onivo Esthetics) where Dr. Johnson presented several lectures and webinars about his products, new technologies, and overall philosophy.? I was running low on my acne product and anti-aging serum from Hylunia, so I decided to try Clarify and Stem Factor from Osmosis to see if they produced the same, if not better results than my existing regimen.

Dr. Johnson does not discount peels completely.? In fact, he offers a professional-only treatment called Facial Infusion, which is a non-acid peel that works in the dermis, not the epidermis, without inflaming the skin.? Of course I had to order that as well, and will be testing it on myself.

So what do I think?

After reading and listening to Dr. Johnson, I have to admit I find his philosophies to be extremely logical.? I like his approach to formulation, and I think he has a very comprehensive knowledge of the physiology (functions) of the skin.? I like that he takes a holistic approach to skin care and overall health, and that he also is truly an innovator in the aesthetics industry.

Even Out Skin Tone

There's Still Time to Join Us